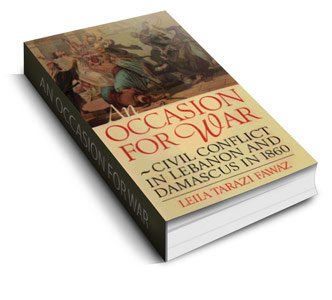 An Occasion for War: Civil Conflict in Lebanon and Damascus in 1860

In the spring and early summer of 1860 a complex set of civil wars erupted on Mount Lebanon pitting various sects, especially Maronites and Druzes, in violent conflict with one another. The reverberations of these battles were soon felt in severe urban unrest involving Sunni Muslims and predominantly Greek Orthodox Christians in Damascus.

This book provides a textured analytical narrative of the civil wars in Lebanon and Syria in 1860, the most serious of sectarian violence in the history of the Arab provinces of the Ottoman empire. With a key eye for relevant detail Fawaz unravels the distinct grievances and conflicts which made up the many facets of the civil wars. Her study shows how social and political conflicts which have the appearance of ‘ethnic’ civil wars cannot be explained without reference to the state at two levels: the shifting centre-region dynamic and the altering communal balance between political institutions. The redefinition of sectarian identities, such as Sunni, Sh’i, Druze, Maronite, Greek Orthodox and Greek Catholic, is placed in historically specific contexts and their relationship with other identities along lines of region and class is closely examined. While keeping the focus on the society and politics of Mount Lebanon and Damascus, the book contains an incisive analysis of the Ottoman and European responses to the 1860 crisis. The conclusion considers the civil wars of 1860 and post-1975 Lebanon in a comparative, historical perspective.

Based on pioneering research, Fawaz’s work makes a major contribution to a more general understanding of the formation of social identities and political conflicts in the modern Middle East. For those interested in the more general historical processes of identity formation and ‘ethnic’ relations, it also provides an acute exploration of how the local context interacted with wider regional and international currents in molding the character of tensions, insurrectionary movements and civil wars of modern times.