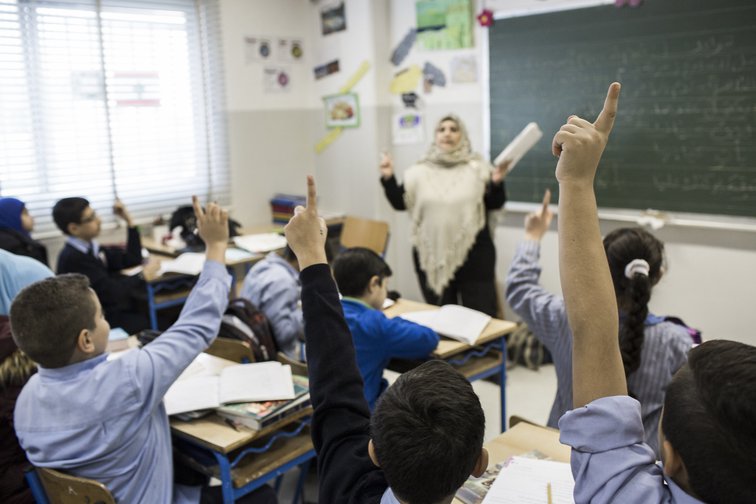 The World Refugee Day this year was celebrated amid a surge in anti-racism movements around the globe. But, the humanitarian response to the refugee crisis is still greatly influenced by geopolitics, racism and xenophobia which were exploited by many politicians in Lebanon for financial gain.

Nine years after the beginning of the Syrian refugee crisis, with hundreds of millions spent on public education in Lebanon by donors, the outcomes are disappointing to say the least. What was the impact of agreements between international donors and Lebanese politicians on the potential schooling outcomes for Syrian children in Lebanon?

Alas, Syrian refugee children were the victims of this informal agreement which compromised their schooling opportunities. Lebanese journalist Riad Kobeissi conducted an investigation into the education response plan lead by the Lebanese Ministry of Education and Higher Education (MEHE), which was aired on 28 May 2020. Kobeissi alleged that the ministry embezzled donor funding allocated to the education of Syrian refugee children. During his investigation, Riad Kobeissi focused on the number of Syrian students enrolled in Lebanese public schools which have been inflated by MEHE in an attempt to obtain more funding from donors. Yet, enrollment rates present just one piece of the puzzle.

If we examine other indicators by the Programme Management Unit (PMU), we find 40 % of school age children are out of education, while 1% of those enrolled are in grade 9, and less than 4 % make it to the secondary stage.

The arrangement between donors and Lebanese politicians is best summed up by the former Education Minister, Elias Abu Saab who addressed the former British Prime Minister, David Cameron, upon his visit to Beirut, stating, “One out of every 50 people who came to Europe was a member of ISIS.”

There is a clear policy by rich countries in the Global North, motivated by racism and xenophobia, to pay countries in order to keep refugees away from their borders. This trade off was well understood by Lebanese politicians who could now demand any price to keep “hosting the refugees” even if this was at the expense of the right to quality education for many Syrian children. In an interview conducted with an official at a UN agency who asked to remain anonymous, she pointed out how a European Union official, during the peak of the refugee crisis in 2015, told her that the European Union is willing to cover the costs of the Syrian children’s education program in Lebanon at any cost as long as they stay there.

While donors’ decision to invest in the public sector can yield more sustainable outcomes and development, these have been at the expense of the education of Syrian children. RACE I (Reaching all Children with Education) was the first 3-year plan developed by UN agencies and the Education Ministry. It was funded by donors including the World Bank, DFID, the EU and other embassies, which is undoubtedly a necessary step in the right direction. The ministry limited access to formal education to public schools even when it could only absorb half of the Syrian children who are of school age. According to RACE I plan, the ministry needs to double its capacity to be able to enroll half of the students, which is quite ambitious considering the weaknesses which the Lebanese public education has suffered from for decades.

In order to absorb these large numbers of students, the ministry launched afternoon shifts in many public schools and charged donors USD 600 per student while the cost of enrolling Syrian students in the morning increased from USD 150 to 300. However, Syrian parents were less keen to enroll their children in the second shift which they deemed to be of less quality compared to the morning shift, something which is supported by PMU statistics and our own research.

There is a clear policy by rich countries in the Global North, motivated by racism and xenophobia, to pay countries in order to keep refugees away from their borders

The fact that the quality of education was not the priority, is best summarized by former minister Elias Bou Saab referring to the importance of providing Syrian refugees a place in a school instead of being on the street. He then adopted a policy of pushing students out of the morning shift and widened the second shift dedicated only to Syrian refugees. The socio-political impact of segregating Syrian children from Lebanese ones, was of lower priority despite the high levels of violence reported in the first few years between students in the two shifts. Moreover, there was little discussion about the teacher recruitment policy which prioritized assigning teachers working in the morning, without discussing the implications of teacher fatigue and its impact on the quality of teaching and learning.

Since the beginning of the Syrian crisis, some private educational institutions in Lebanon took the initiative of providing educational opportunities for refugee children at a cost of USD 150 per student collected from local and international donations. One important question that arises from RACE I, is why the education response plan was restricted to the public sector and did not encompass the private one which absorbs 70% of students in Lebanon and thus could have increased the enrollment rate of Syrian children for a small cost.

To answer this question, I interviewed a UN official in 2015 who explained that donors would not do anything that would upset the Lebanese Ministry of Education or the Lebanese government even if this could affect Syrian refugees. This hegemony was not limited to the private sector but soon engulfed NGOs who were suspended from conducting any programs with public schools. The official reason given by PMU at the time to suspend all non-formal education program conducted by NGOs was quality control. Since then, PMU took charge of non-formal education, one of which is the Accelerated Learning Program (ALP). According to PMU statistics obtained directly by the author, in 2018, 12,614 Syrian students were enrolled in ALP programmes and 1,363 successfully completed the school year, i.e. 10%, yet in another report by PMU the percentage is less than 2%.

To date, the ministry’s hegemony, which was supported and funded by the donors, left 40% of Syrian children out of school due to lack of schools, overcrowded classrooms, and transportation costs. All of these reasons reveal that engaging private schools could have increased the capacity of schools in Lebanon to enroll more Syrian children.

Racism, xenophobia, and corruption whether in the Global North or among some Lebanese politicians who exploited the Syrian crisis to make financial gains or to win favors with their local electoral base, rendered hundreds of thousands of Syrian children “a lost generation”. An inclusive and structural education reform could have yielded better outcomes for refugees and nationals. The scale of the Syrian crisis requires the collaboration of all parties, public, private, NGOs and the donor community.