Human Rights Watch and the Center for Lebanese Studies: Discussion on Egypt, Syria and Lebanon 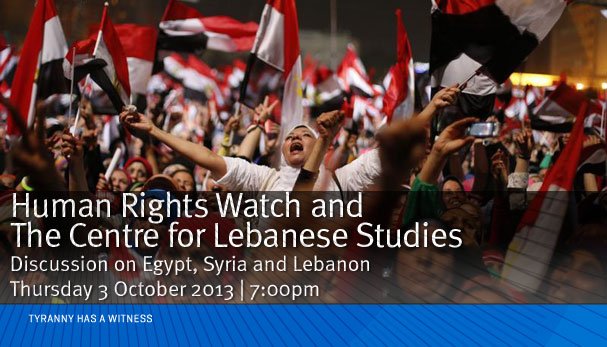 Join us for a panel discussion and dinner

Human Rights Watch and Egypt Director, Heba Morayef, have been at the forefront in documenting grave human rights abuses in Egypt and in speaking up for basic rights and fundamental freedoms for all Egyptians.

In her capacity as the Middle East Editor for the Financial Times, Roula Khalaf has been following the Syrian crisis since inception and has seen the repercussions throughout the region. Roula will offer her perspective on how the on-going conflict is impacting neighbouring countries and Lebanon specifically.

Heba Morayef, Egypt director in the Middle East and North Africa Division, investigates human rights abuses in Egypt. She produces detailed reports, news releases and op-eds based on her findings and conducts local and international advocacy. Before joining Human Rights Watch, Morayef worked at Amnesty International's international secretariat in London as campaigner on Libya and Tunisia. She has also worked as Middle East program officer at Article 19 in London, and at UNDP's Human Rights Capacity Building Project in Cairo.

Roula Khalaf is an associate editor and Middle East editor of the Financial Times. She has worked for the FT since 1995, first as North Africa correspondent, then Middle East correspondent and most recently as Middle East editor. Roula oversees FT's coverage of the Middle East region, its various bureaus and the newly launched Middle East edition. She writes regularly on Middle East politics and business Before joining the FT, she was a staff writer for Forbes magazine in New York. Roula was the recipient of the International Media Award in 2008 in recognition of her hight standards of reporting and the quality of her news analysis.