Lebanon's "October revolution" : An end to the civil war? 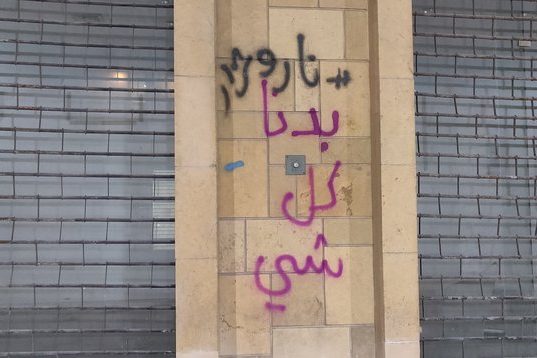 On Tuesday October 29 at 4:00 pm, the Lebanese Prime Minister Saad el Hariri announced the resignation of the government, after thirteen consecutive days of unprecedented cross-sectarian and leaderless nationwide protests. As the streets erupted with joy, the first victory of the “October Revolution” did not mark its end. While rebuilding their camp in Martyrs’ Square, destroyed only few hours earlier by the partisans of the Amal Movement and Hezbollah, the peaceful protesters vowed to remain on the streets and build new foundations for their country.

Since October 17, hundreds of thousands of Lebanese took to the streets calling for change. “I want to live, I want to breathe”, “I want to find a job in Lebanon”, “I want bread and happiness”, “I want my rights as a women”, “I want electricity, water and infrastructure”, “I want a better country for my grandchildren”, “I want to tweet without being arrested”, “I want everything they stole from us” one could hear across Lebanon and among the Lebanese diaspora.

At first, one might be puzzled by this wide range of seemingly unrelated demands, nonetheless they all stem from the same will to break free from the grip of the sectarian powers. The Lebanese multifaceted power sharing system entails both the distribution of government and administrative posts among the eighteen confessions and the relinquishing of personal status jurisdictions to the religious courts. By rendering the citizen-state relation mediated by the sect and its affiliated political party, the sectarian regime fostered clientelism, nepotism and corruption, lead to a poor governance, maintained an unstable political equilibrium and impeded the formation of a fully-fledged democracy.

Opposition to the sectarian system is not new in post-war Lebanon, yet the “October Revolution” is turning a page in the history of a country struggling to come to term with its past. Triggered by the government decision to impose new taxes (including one on WhatsApp calls), the October mobilization can’t be reduced to a mere anti-government protest against austerity measures but is a true call for a revolution to overthrow the established political order. For more than three weeks, hundreds of thousands of Lebanese are reclaiming the streets, transcending sectarian divides and embodying the unity they aspire to.

While anti-sectarian mobilizations are typically led by youth and young adults (born after or towards the end of the 1975-1990 civil war) and usually instigated by political groups (students’ organizations, feminist collectives and leftist parties) or non-governmental organizations, on the evening of October 17, thousands of people from different age groups and social backgrounds, spontaneously took to the streets, to voice their anger and condemn the sectarian oligarchy. Unlike the typically Beirut-centric movements in post-war Lebanon, the “October revolution” is inherently decentralized. The leaderless protests rapidly spread across the country and from North to South, major cities and smaller towns witnessed a unique explosion of anger and hope. For the first time, cities and neighborhoods known as the strongholds of sectarian political parties, such as Tripoli, Tyre, Jal el Dib or Nabatieh were at the forefront of the uprising.

Across the country, protesters ripped down posters of sectarian leaders, openly insulted them and called for the "downfall" of a political class which ruled the country for more than three decades. “All of them means all of them” was the revolution’s rallying cry and protesters blamed sectarian parties across the political spectrum. The Lebanese Forces (a right-wing Christian-based party) remained subject to heavy criticisms, despite its resignation from the cabinet on the third day of protests and this time, the role of Hezbollah in the resistance against Israel did not protect it nor its religious leader, Hassan Nasrallah, from severe accusations, particularly after its supporters assaulted the peaceful protesters.

The “October Revolution” is a revolution against the ghosts of the civil war, feeding a politics of fear, for more than thirty years, the fear of ‘the other’ (confession) and that of civil unrest if the sectarian balance of power is disrupted. Since October 17, the walls of fear began to crumble under the weight of the ever-growing economic crisis, widening the horizons of possibilities and bringing to light interest-based alliances against the sectarian oligarchy.

While for years, the tireless grassroots efforts of young anti-sectarian activists slowly paved the way for the “October Revolution”, the dire economic conditions and waning trust in the governing parties pushed the older generations to overcome their fears, leave their “comfort zones” and fight for a political alternative, next to those who first dared to dream. Many parents who used to consider their children’s mobilisation against the sectarian regime as marginal or doomed to failure joined them in the streets while others rebelled against the parties they used to support or even fight for during the civil war.

If feminist collectives always played a leading role in the post-war anti-sectarian movement, this time, the mobilization of women from different age groups and social backgrounds against the patriarchal sectarian hegemony was unprecedented. From the very first day, a woman side kicking the Education Minister’s bodyguard threatening to open fire on the protesters, became the icon of the revolution. Across the country, women were at the frontline calling for their rights, they led marches, reclaimed the streets and often fearlessly formed barriers between the security forces and the protesters.

In a country where sectarianism is systematically deployed to prevent the emergence of class-based politics and co-opt any attempt in this direction, the massive mobilization of both lower and middle classes against a political and an economic system that enriches the few and impoverishes the many, was also a breakthrough. Declaring a nationwide general strike, which lasted two weeks (during which banks, schools, universities and many businesses remained closed) protesters unanimously dismissed the government reform plan, called for social justice and demanded an end to the systemic corruption which led the country (with one of the highest debt to GDP ratios in the world) to the brink of a financial collapse. Besides the important mobilization of established university students’ networks the involvement of secondary school students, teachers and academics was notable. Prominent universities issued statements of solidarity, doctors marched wearing their white coats, lawyers mobilized, gave talks and offered free legal assistance, artists staged a sit-in at the state-run TV station and different efforts to organize in the workplace or revive unions were observed.

Across the country, people from different walks of life, raised the Lebanese flag, sang the national anthem and joined hands to form a human chain from north to south, along the coastal highway. They blocked roads but built bridges and connected neighborhoods supposedly on the opposite sides of the political spectrum. More than a symbolic display of national unity, the “October Revolution” is an affirmation of a Lebanese identity against a system that segregates its citizens along sectarian lines (through differentiated personal status laws and a system of quota for political representation).

If the protesters did not unanimously call for a secular state, their attempts to distinguish between politics and religion were clearly visible in their discourses and practices. Many Muslim and Christian protesters displayed their own religious beliefs while insulting their sectarian leaders. Others condemned the political instrumentalization of religion, asserting that being born and raised in a given community and even embracing its belief system do not necessarily mean adhering to its corresponding political party. Some even prayed together for Lebanon, affirming that religious and cultural differences are not per se a source of conflict.

The Lebanese “October Revolution” is not only battling the old but building the new. In the streets, protesters strive to live their ideals and practice the values they endorse and through personal daily acts of resistance, they are building the country they aspire to. Women are shattering stereotypes and reclaiming the streets and with graffiti, dance and humor, protesters are fighting for their freedom of expression, in a country that can arrest a citizen for a tweet. In different towns, youth are camping overnight and playing music and football to fight the usurpation and increased privatization of public space. Families and children are waking up early to clean the streets and recycle in a country that lacks a green waste management plan. In Downtown Beirut, they reopened the doors of the abandoned Grand Theatre, in a country that often failed to protect its heritage and challenged the neoliberal policies and state-sponsored amnesia that shaped the post-war reconstruction process of the city center. They screened movies and organized rave parties at the war-scarred derelict cinema known as “The Egg”, held public debates in the small gardens and much bigger parking lots, set up food stalls, improvised sidewalks cafés, created kids play zones and a small library and brought life back to what was once the bustling heart of the city before it became exclusively geared towards the upper-class.

More than three weeks into the revolution, Lebanese across the country are relentlessly fighting against the sectarian oligarchy undeterred by the establishment’s repressive measures. After the army forcibly opened many roads on November 5, protesters did not back down. Thousands of Lebanese rallied outside various public institutions and state-affiliated companies while many neighborhoods started banging pots in the evening. Most university students did not return to class and the massive mobilization of school students across the country, was unprecedented. They skipped school, led marches and protested in front of the Ministry of Education to reclaim their future.

While protesters are determined to pressure the political establishment to form a government composed of independent experts (not aligned with the sectarian-based parties) the counter-revolution is resorting to its old techniques, trying to ignite sectarian tensions push for a general amnesty law (as in 1991) to escape accountability. At the time of this writing, the questions are many. What is the best way forward to lead the country out of the economic crisis and prepare the grounds for a more democratic system? And how will the protesters succeed in breaking the circle of impunity and hold the sectarian leaders and warlords turned politicians, accountable for “everything they stole from the people”?

If the next chapter of the ”October Revolution” can hardly be anticipated, for now, one can confidently assert that it is slowly healing the wounds of the civil war and paving the way towards a new kind of politics beyond sectarian lines. If the days ahead risk to be stormy, the winds of change are blowing since October 17 and while the autumn leaves are falling, new seeds are being planted across the country, patiently waiting to bloom.