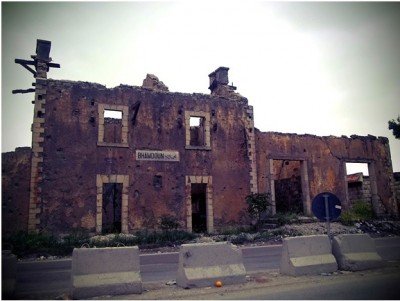 BEIRUT—The history textbooks in Lebanon haven’t changed in some important ways since the 1950s.

The country’s different political factions continue to fight over who gets to write the history of what happened in Lebanon after independence from the French. While old bomb shelters from the country’s fifteen-year civil war have been repurposed into nightclubs, the wounds from that time have not have healed enough to let the conflict’s story into the nation’s textbooks.

All across the Arab world, history is often an undesirable thorn in the side of governments. “There are numerous reasons why governments don’t want to revisit the past,” says Judy Barsalou, former president of the El Hibri Foundation, in Washington, D.C., and a scholar of history and political science. In Egypt, a country proud of its distant past, each contemporary regime has tried to erase the marks of the one before it, with that tendency intensifying after the January 2011 revolution. One particular issue kicked back and forth, depending on the government of the day, is whether students should be taught that Egypt is part of a wider Islamic caliphate. Since President Abdel Fatah el-Sisi took office last year there have been attempts to remove that perspective, says Barsalou.

Gulf States are nervous about teaching the history of democracy in other countries, says Barsalou. “They want their citizens to be well behaved so they’re intent on teaching citzenship without instilling democratic values.”

Last year, a controversy broke out in Jordan after the Ministry of Education deleted a lesson in the third grade history book about a Jordanian pilot killed in the 1967 war with Israel. Many argued that the deletion was required by the peace agreement with Israel. The ministry denied the accusation and said it was modernizing the curriculum.

In Lebanon, students are typically taught nothing of the 15-year civil war, which began in 1975. “The syllabus includes the history of Lebanon during the world wars and things prior to that until the exact date of November 22nd 1943, which is the Lebanese Independence Day,” says Fayda Mehanna, who teaches history at the College Protestant Francais in Beirut.

No government since the war has managed to pass a bill that would push a new version of history into the country’s classrooms. Several times there have been concerted efforts to reform history education, but rivals have always blocked the attempts at bringing a more neutral version of history to the classroom.

Some education experts are now trying to circumvent the parliament. “We want to hand the debate back to educators,” says the director of the Center for Lebanese Studies, Maha Shuayb. “Politicians should have nothing to do with history. They should leave it alone.”

Some policymakers have argued that the lack of reform allows time for Lebanon to fully heal itself and grow strong enough to confront its recent history without the fear of reigniting the conflict.

But the “let sleeping dogs lie” argument is a weak one according to Barsalou. “Silence is never the proper course of action,” she says, “Neither is the manipulation of historical memory.”

Shuayb agrees that ignoring the problem will only make things worse. “The ghost of the civil war is always present, that’s why teaching the history of it is extremely important,” she says, “Any attempt to politicize it is an injustice to the people.”

School systems are often the last institutions to be reformed after social injustice or conflict, says Barsalou. They cling to the past that everyone should be keen to move on from. “After all,” she says, “the separation of black and white students in South Africa persisted after the apartheid fell.”

At the university level in Lebanon, there is no government-mandated history curriculum at a university level, which means teaching the civil war is possible—if unusual, says Shuayb. “It is not really taught except if it is a personal initiative by a professor.”

Adnan El-Amine, a retired education policy professor from the American University of Beirut and one of the founders of the Lebanese Association for Educational Studies, agrees with Shuayb. “It’s rare for the civil war to be taught at university,” he says, “because people in charge of choosing the curriculum are usually conservative.”

There may also be concerns from university administrators that teaching the civil war could create divisions between students, says El-Amine, although he thinks these worries are unfounded.

Yasmine Dabbous, a journalist and professor at the Lebanese American University taught a course on media history in Lebanon that dealt with the civil war. The class wasn’t intended to create a historical account of the war, but to look at how journalists experienced and reported it.

Despite a lack of awareness of the civil war before the class began, Dabbous says feelings of animosity between students of different backgrounds didn’t surface. They reacted similarly, becoming afraid that a civil war might flare up again.

“Even I, as a professor who lived through the war,” she says, “realized during the class that we urgently need to study our history because we are at risk of repeating it.”

Shuayb says the country’s successive governments and opposition groups are likely to continue to battle it out in an excruciatingly endless cycle, which is why she has stopped waiting. The Center for Lebanese Studies has begun to gather those who want to improve the teaching of Lebanese history. Shuayb has spotted somewhat of a loophole in the current system: Schools and teachers only need to follow the official syllabus for students aged 14 and 17, which is when they take the national exams. “This gives us the freedom to do whatever we want in the other grades,” she says. In effect she wants to create an alternative curriculum that would serve students during the years they aren’t preparing for the national tests.

She wants help from historians to get the content right, but then she wants educators to come together and figure out how to best teach it “We have a big fight ahead of ourselves,” confesses Shuayb, “But for us it’s not about peddling a particular story. It’s about making sure students can analyze and write about history intelligently.”

For this she looks to the United Kingdom, where the center used to be based, for inspiration. “They teach the process of history and how it’s made, rather than one version of events.”

Shuayb also likes the British system because of the involvement of non-governmental professional groups, such as the Historical Association, in curriculum development. She says in Lebanon too many people who aren’t qualified in education get to decide on the syllabus. “Just as scientists would hate a politician to choose what they can research, for history teachers it’s the same.”

It will take about ten years to design this alternative syllabus and have it taught in a meaningful number of schools, estimates Shuayb—although she concedes this may be optimistic. “We need to garner the courage of teachers,” she says.

Mehanna thinks this would be a good idea; she’s in favor of teaching the civil war in her history class. She already answers inconvenient questions from students and does her best to explain why officially omitted material is not on the syllabus.

If Lebanese teachers could agree on a curriculum that deals with the civil war, it offers hope to other war-torn countries, says Shuayb. “I sometimes wonder what the Syrians will do about this when their war is over.”