For Many Palestinian Refugees, Higher Education Is Not an Option 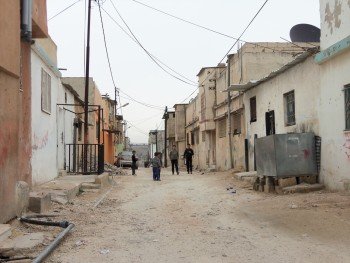 Ammar Abu Yousef is going to celebrate his thirtieth birthday soon. For years, he dreamt of being a pharmacist. But now he has ended up in a small shop with handmade clay walls selling discounted mobile phones. The shop is in the Jerash refugee camp in Jordan, locally called the “Gaza camp” because more than 20,000 refugees from Gaza settled there after the 1967 war.

The camp lies less than an hour north of Amman near the tourist attraction of Jerash’s Roman ruins.  After turning into a valley, the streets become narrower and are lined by nearly windowless houses of dilapidated concrete with roofs of corrugated zinc and asbestos. Public transportation is scarce, so many people are walking in the streets and cars seem to brush them as they drive through.

“I used to have birthday wishes, but since my eighteen birthday I realized that my wishes have no sense as I am ex-Gaza refugee,” Ammar said with a smile.

Ammar said he was a hardworking student but could not enter university. “It was impossible for us to pay the universities’ high fees,” he said. “Even if we have the money we will not be allowed to work later. So, waste the money and time.”

Unlike the Palestinians who came from the West Bank, arrived earlier in the country, and live in other camps, Gaza refugees do not have Jordanian citizenship. Even though they can hold a temporary Jordanian passport, valid for two years, Gaza Palestinians are considered “foreign” in Jordan—even though at least three generations have been born there.

In Jordan, as is often the case in the other countries that neighbor Israel and Palestine, this complicated legal situation has had many negative effects, particularly in education and employment.

The Palestinian students can study until the tenth grade in overcrowded schools run by the United Nations Relief and Works Agency. According to a community worker, there is one school for boys and another for girls in the camp. Around 5,000 students study in these schools, with two daily shifts, in classes of about 55 students per teacher. Then, they move to public schools. Girls can study in the camp, but the boys have to take a bus to Jerash, which many families can’t afford. Many students drop out.

The illiteracy rate in the camp (13 percent) is twice that of the country, according to one survey. The percentage of those who pursue post-secondary education is 13 percent in the camp compared to 22 percent in Jordan.

The Palestinians are treated as international students with commensurate fees, said Hanaa Asfour, a researcher on Palestinian refugees’ affairs in Jordan. The only means by which a student from the camp might get admission with Jordanian fees is through special quotas, she said.

One such quota, a royal quota, divides 5 percent of public-university seats among the 13 camps in Jordan. Around 350 seats are given by the Jordanian government to the Palestinian embassy, but priority goes to Palestinians actually residing in the West Bank and Gaza.

If the number of Palestinian refugees attending university is low, only a tiny fraction move on to an advanced degree: “Out of the 6.9 percent who obtained a bachelor degree or above, only 0.3 percent obtained a master’s degree and a 0.1 percent obtained a Ph.D.,” said Asfour.

Restrictions on employment also restrict the professions that Palestinians from Jerash want to study for. They are excluded from jobs in the public sector including public schools and universities. They cannot be licensed for certain professions such as dentists, lawyers, agricultural engineers, legal accountants, and pharmacists. They are also barred from working in banking and tourism.

“We cannot become members of cooperative associations or set up a private business outside the camp boundaries without a permit,” one activist said.

As a result of all these restrictions, the unemployment rate among ex-Gaza refugees stands at 39 percent, more than double the national average of 14 per cent.

“Leaving young people without education or work could easily led them to deviation and extremism,” said Oroub El-Abed, a senior teaching fellow at SOAS, University of London, who focuses on Palestinian refugees. Arab governments, she said, have left the responsibility of caring for the refugees to the U.N. relief agency, which provides very limited basic assistance.  The position of many Arab governments is that giving Palestinians citizenship would mean blessing the past actions of Israel and accepting that the Palestinians would never return to their homeland.

In Egypt, Palestinians do not have to live in camps, but they also struggle there to get education and employment. They have to pay school and university fees in British pounds, making it expensive for them. They have to compete with all foreigners for jobs in a 10 percent quota at any workplace.

In Lebanon, the situation is similar to Jordan. A law passed in 2010 granted Palestinians permission to work in many occupations. But the reality, say Palestinians, is that discrimination is still systematic in education and the workforce.

“Here in Lebanon they prefer Lebanese over Palestinians in everything,” said Haidar (19 year-old), a Palestinian from south Lebanon who long dreamt of becoming an engineer. Haidar, like the vast majority of Palestinians in Lebanon, was unable to afford the high fees of Lebanon’s private universities. Instead, he opted to attend the public Lebanese University. Since it didn’t offer engineering, he is studying computer science. “This, [the] only choice, doesn’t satisfy my goal,” he says.

Haidar gained a scholarship to a Lebanese private school thanks to his high grades. As in Jordan, the vast majority of Palestinians are educated in relief-agency schools. Drop-out rates can be 10 times that of the Lebanese population.

With engineering not an option, Haidar doesn’t know what he will do after he finishes his studies. “I don’t have an idea now. I will live it to the fate or the universe,” he says “If I have a chance to leave, I will leave. It’s my only option right now, to stay in a Lebanese university.”

Haidar’s university experience is similar to that of many other Palestinian students. “The majority of the Palestinians go to the public university, but many of the courses are very low quality,” says Maha Shuayb, the director of the Center for Lebanese Studies, and the author of a recent report “The Art of Inclusive Exclusions: Educating the Palestinian Refugee Students in Lebanon.”

From what she has seen, the education problems among the Palestinian population in Lebanon start early. “More than 20 percent of children are not making it to secondary education,” she says.

Shuayb feels that the state of refugee education is increasing the divide between Palestinians and Lebanese. Palestinians are forced, by dint of studying the Lebanese curriculum, to learn rights they will never have, while learning very little of their own history. The limited access to education also increases the socioeconomic gap.

Those of Palestinian heritage living in all countries have a reputation for placing great value in education. But, as refugees, some believe that faith in education is slipping. “It used to be that Palestinians would see education as their way out,” Shuayb says. “Now, I don’t think it’s the same, unfortunately.”