Conference on Healing the Wounds of History: Rwanda

The Centre for Lebanese Studies at St. Antony’s College, University of Oxford, The Guerrand-Hermès Foundation for Peace, in partnership with The Institute of Diplomacy and Conflict Transformation at the Lebanese American University, have co-convened an international conference entitled:

“Healing the Wounds of History: Addressing the Roots of Violence”

For many years, Lebanese people have been haunted by past conflicts and traumatic memories, resulting in strong feelings, violence and pain. Unresolved grievances create lingering conflicts, which continue to leave wounds open. Without healing these wounds, they further obstruct peace and stability in Lebanon.

The search for alternative approaches to conflict transformation and peacebuilding is of paramount importance to healing our collective wounds together and addressing the roots of violence in Lebanon. By doing so, it can become possible to re-build relationships in the country that has long suffered from division and lack of trust between individuals and their communities.

For these reasons, 160 people including thinkers in the field, historians, psychologists, psychiatrists, sociologists, political scientists, educators, activists, professors and students from around the country and from different parts of the world, met on 11-13 November 2011 at LAU, Byblos for this long- overdue exploration.

In the morning of 11th November, at the conference opening, Dr Walid Moubarak of the Institute of Diplomacy and Conflict Transformation (IDCT), welcomed participants from near and far to the LAU and pointed out how this timely event ties with the IDCT’s own ongoing research endeavour.

Mr George Asseily, the Founder and Chairman of the board of Governors of the Centre for Lebanese Studies (CLS), explained that although it is the CLS’ mission to initiate scholarly debates aimed at better understanding of Lebanon and helping find solutions to its problems, they have decided to organise this unique but much needed event in order to engage directly individuals and groups, especially the young people, in actively healing the wounds of history.

Mrs Alexandra Asseily, co-Founder and member of the board of Governors of CLS and who conceived the vision of the ‘Hadiqat As-Samah - Garden of Forgiveness’, reminded us of our ancestral influences and ‘embodied memory’ across generations in the Lebanese history of conflict and trauma, where individuals could become receivers of inherited patterns from conflict rooted before our time. Therefore, one of the goals of the conference was to explore the role of forgiveness in freeing ourselves from the grips of historical patterns. She highlighted that to forgive is NOT to forget. In fact, we must remember, so that we will not let such violence and atrocities happen again.

H.E. Minister of Education and Higher Education Hassan Diab, representing the President of the Council of Ministers Mr. Najib Mikati, congratulated the conference partners’ vision and echoed the need for a more holistic approach to peacebuilding and conflict transformation that includes, but also goes beyond social justice, human rights, social and economic stability, educational reform and so forth. 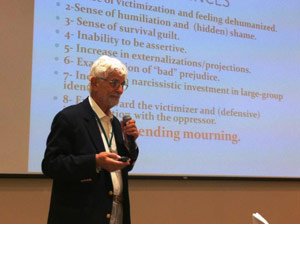 The Conference’s main keynote address was given by Prof. Vamik Volkan, Emeritus Professor of Psychiatry at the University of Virginia, USA. It begins with a convincing analysis: when large groups (i.e., tribal, ethnic, national, religious, and political ideological groups) are in conflict, psychological issues can contaminate most of their political, economic, legal, or military concerns. Prof. Volkan explored shared reactions to large group conflict and traumas such as victimisation, dehumanization and humiliation. He stressed the importance of mourning because the inability to mourn significant losses (people, homes, prestige, honour, etc.) throughout generations also may create ‘entitlement ideologies’ in the society, allowing groups to claim their ‘rights’ to recover their loss, continuing the cycle of violence. The incapacity to move forward leads the group to deposit their trauma on future generations. Therefore, collective mourning can be part of the journey of societal healing through arts, music, poetry, movies, conferences, etc. (without humiliating the other), and through ‘shared linking objects’ including reparative monuments, museums, gardens, such as the Hadiqat As-Samah in Beirut.

Prof Volkan proposes a number of strategies towards understanding and unblocking shared traumas, characterised by their holistic and multidisciplinary approaches in which history, political sciences, diplomacy and psychology converge.

Following Prof Volkan’s address, Dr. Leila Fawaz, Founding Director of the Fares Centre for Eastern Mediterranean Studies at Tufts University, began the discussion on the cycles of violence in Lebanon through the lenses of the Lebanese War, and linking the latter to the recent phenomena such as globalisation and the emergence of modern warfare. As the respondent, Dr. Antoine Messarra emphasised the necessity to rediscover and reawaken the ‘sources of memory’ so as to start a transformative process of healing at a societal level. He highlighted the difference between the histories we study in a classroom setting or through books and the history we actually learn from our family and peers. The discussion continued into the next plenary on psycho-social approaches to healing cycles of violence, aiming at bridging the psychoanalytical aspects of group trauma and Lebanon’s cyclical history of violence and dividedness.

During the first afternoon, the participants witnessed the testimonies from those who fought during the wars in Lebanon and in Northern Ireland as well as those who suffered losses during violence and conflicts in Lebanon, England and Rwanda. These individuals recounted their journeys of seeking reconciliation with the other, by asking forgiveness and by liberating themselves from the burden of pain and trauma through forgiving.

Ms. Joanne Berry from England whose father was killed in a bombing planted by Mr. Patrick Magee from Ireland spoke as a pair of how they have been able to reconcile through deep listening and forgiveness. This journey through compassion and forgiveness has taken the pair to a shared mission towards building bridges for peace, together. Jo and Pat embraced each other at the end of their testimonies, a symbol of their friendship.

After these moving narratives, for the rest of the first day, the participants began to work in groups led by professional workshop leaders and facilitators. These sessions were intended to foster a safe space in which individuals could share their own experience of the conflicts and vision of healing and reconciliation.

The second day of the conference started with a panel discussion on how psycho-social approaches can make it possible for us to break from our past, appreciate our individual and collective gifts and to be empowered to heal the wounds of history.

The majority of the next two days focused on the group breakout sessions. Having established a common platform for communication, groups worked together to identify what they thought to be the historical wounds of Lebanon and to construct a way in which Lebanese can work together towards a cohesive and peaceful society. Using a series of explorative exercises and techniques, workshop leaders and facilitators created a propitious atmosphere whereby the participants were able to engage in active and compassionate listening and to embark on their own journey towards reconciliation and forgiveness. 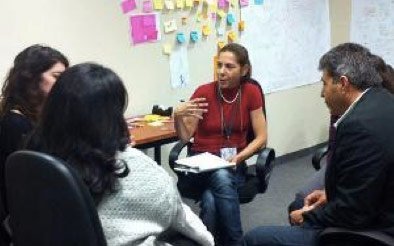 Unique in their own, each group of 15-20 participants had a different approach to addressing the roots of conflict in Lebanon. These approaches which encompassed a spectrum of techniques ranging from art therapy to structured reflections and group debates sought to unravel an obstructed journey towards the ‘other’.

During these intensive and experiential workshops, Lebanese from diverse backgrounds and international participants listened to each other and were heard; they shared their own narratives of conflicts and trauma, but also their dreams of transformation and peace; they showed their vulnerability, but also offered gifts and support to each other; they laughed, but also cried as never before, together; they expressed doubts and suspicions of the possibility for peace in Lebanon, but also brought creative ideas and expertise to the table.

The final plenary of the conference had heard some most profound reflection on the journey that the participants, facilitators, and speakers had embarked on together for the three days:

First, each of the six groups reflected on their journey and shared inspirational ideas for a more unified and peaceful Lebanon. Many topics were brought forward, including the importance of deep listening and sharing (conflicting) narratives in order to understand grievances and release them through forgiveness; the urgency to empower and educate children, young people and the communities at large; and the need for public spaces where people can encounter differences, celebrate Lebanon’s rich diversity, and create opportunities for dialogue and constructive human relations.

Although each group came up with their own creative thoughts, one theme resonated amongst all: the Lebanese are ready to take concrete steps towards healing their past, bridging their present, and working towards a hopeful and peaceful future. In order to do so, the participants drafted a ‘Declaration for Healing Our Wounds of History’, which they would like to present to His Excellency Prime Minister Najib Mikati.

Next, each of the participants was invited to summarise in one sentence what had touched them most during the conference, and people’s accounts of their experience were overwhelmingly powerful. There were many tears shed and much hope raised. There was a consensus that in varying degrees, each person was enriched, enlightened and transformed by the conference’s processes, including the facilitators and organisers themselves. For instance, Ziad Moussa, a participant and facilitator at the conference, commented: ‘In my 20 years of work on dialogue in WCRP, MECC and other platforms, I have never experienced nor came anywhere close to something as powerful as what took place over the weekend...’

Jean-Paul Samputu is a world renown African singer and song writer. He is also a survivor of Rwanda genocide where his parents and a sibling were killed by his childhood friend. Samputu told the conference about his journey moving from the darkness of pain, revenge and despair to becoming a champion of forgiveness after he reconciled with the killer. Samputu said that he has never been so touched by such deep processes as in this conference. This conference has given him hope that a national process of healing the wounds of violence is possible. Samputu has invited the organisers of the conference to help set up a similar process in Rwanda in the coming year.

The conference ended with a trip to the “Garden of Forgiveness” in Downtown Beirut. All participants wrote on copper tags the grievances that they were ready to let go of and the thoughts that they no longer wish to take with them into the future. These tags were placed on an olive tree that was planted outside of the Garden.

One participant said that from this day on, Hadiqat As-Samah will not just be plot of land lying quietly amongst the ancient ruins, it will, instead, become a lively space in each of us.

Indeed, from this day on, Hadiqat As-Samah will be a place of mourning, inspiration and hope.

For more information regarding Healing the Wounds of History please see the website here.