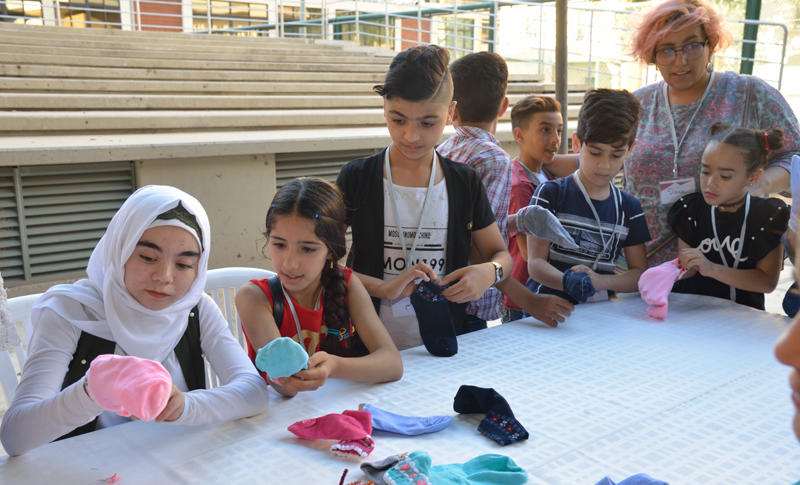 “When I grow up, I want to be a doctor,” scribbled 13-year old Roqaya on a whiteboard next to the Safadi Fine Arts Building. In another context, this would not have been as significant since international law – which stipulates that all children have a legal right to free and compulsory primary education, and access to secondary education – would have allowed her to achieve her dream. “Not for a Syrian refugee living in the Sabra Palestinian refugee camp. The mere fact that Roqayya was able to write on that board in proper English is itself an accomplishment,” says Hany Shokair from Jusoor Syria, an NGO that took part in the event entitled “A Day in My Life” hosted by the Centre for Lebanese Studies (CLS) at LAU.

The event, which coincided with World Refugee Day, brought to campus more than 60 Syrian refugee children, as well as LAU faculty and staff with their children, for an interactive puppet show followed by a puppet-making workshop. The show recreated day-to-day situations and asked children to weigh in on important issues such as bullying and conflict resolution, as well as gender and ethnic discrimination, which were simplified and delivered in colloquial Arabic to allow for optimal understanding.

The general narrative in Lebanon is that Syrian refugees are placing an economic burden on the Lebanese infrastructure, including the public schools’ offerings. This has led the government to add on an afternoon shift to accommodate Syrian refugee children, estimated at 500,000.

However, this segregation has created additional problems. “At the educational level, this translates into bullying, violence and exclusion of Syrian children. Over time, such exclusion can lead to friction between communities,” explains CLS Director Dr. Maha Shuayb, who was a pioneer in researching education in emergencies. Inclusive education policies for all children, regardless of their religious, ethnic or economic backgrounds, is the key to preventing future disasters, she adds.

CLS reports further refute that public schools are burdened by the refugee crisis, as research findings have shown that well before the refugee influx, less than 30 percent of the Lebanese student population was enrolled in public schools. The centre has further captured similarities in school experiences between Syrian refugee children and economically disadvantaged Lebanese children, due to inherent weaknesses in the public school system. Among them is the challenge of learning math and science in a foreign language, which has long been a common drop-out factor.

As such, the primary goal must be to improve access to quality education across the board. The good news, says Shuayb, is that “steps taken to improve the refugee experience also positively impact local children’s experience.”

Jusoor Syria is one of the NGOs invested in making education more accessible, by taking in students who have either dropped out or who were unable to register at public schools, and teaching them within the capacity of their schools. Another partner that helped CLS bring the children to LAU is Alphabet – Alternative Education, which has similarly done noteworthy work, in addition to relief efforts in Syrian camps.

“In class, we often talk to our students about higher education as a next step. Having them walk into the gates of LAU today held a special meaning because they finally got to experience what a university is,” said Shokair with clear emotion. These children, he added, are very rarely exposed to motivational experiences, as they rarely even leave the refugee camp.

Going back to Roqaya, he revealed that only nine months ago, she was unable to write or read in English. He was thrilled when she reached for the pen.