Education for Social Cohesion in Lebanon 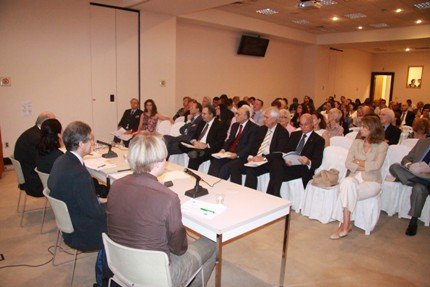 Introducing hands-on civic education and critical thinking to curricula, while promoting student councils at schools, will enhance social cohesion among students of various religious and ethnic backgrounds in Lebanon. These were some of the main recommendations made by a three-day international conference and workshop on education and social cohesion which wrapped up over the weekend.

Organized by the Centre for Lebanese Studies (CLS), based at St Antony’s College, University of Oxford and co-hosted by AUB’s Issam Fares Institute for Public Policy and International Affairs (IFI), the conference brought together an impressive mix of local and international experts from the private and public sectors who discussed ways to promote better integration and social cohesion among the various Lebanese sects, in order to prevent future civil conflicts.
The conference, held on Oct 15-17 at AUB, was under the High Patronage of President Michel Suleiman, represented by Minister Tarik Mitri; Prime Minister Fouad Siniora, represented by Minister Khaled Qabbani; and Speaker Nabih Berri, represented by MP Marwan Fares; as well as Minister of Education Bahiya Hariri, represented by Dr Maliha Fayad, president of the Centre for Educational and Research Development, who opened the conference.

Organizer Maha Shuayb, the current CLS fellow, said, “This was a very good start; but the success of this conference does not rely on what happened up to this point… but on what comes in the next steps. I hope people will be committed to their promises.” Shuayb, however, expressed disappointment at the low turn-out of public sector representatives, “despite the education ministry’s best efforts.” “But we were very pleased with private schools’ active involvement and wide-ranging representation,” she added.
What about the next steps? Shuayb said that, as a first phase, the recommendations will be implemented in five different secondary schools that represent a diversity of regions, private and public schools, faith and secular schools.
In parallel, a lobby group is being formed to target both the public and private sectors. Currently at least 30 members have signed up for this group, and workshops will be held in the near future to train its members on how to maximize their efforts and impact. Among the other recommendations made by the conference, were:

CLS is a London-based independent academic institution and registered charity founded in 1984 with the aim of conducting impartial and balanced research on Lebanon. CLS is affiliated with the Middle East Centre at St. Antony’s College in the University of Oxford, England.

IFI at the American University of Beirut was founded in 2004 through the Issam Fares Foundation. It has become one the region’s leading think tanks on issues of public policy and international relations in the Middle East.