Children in Lebanon Cannot Afford to Lose Another Academic year 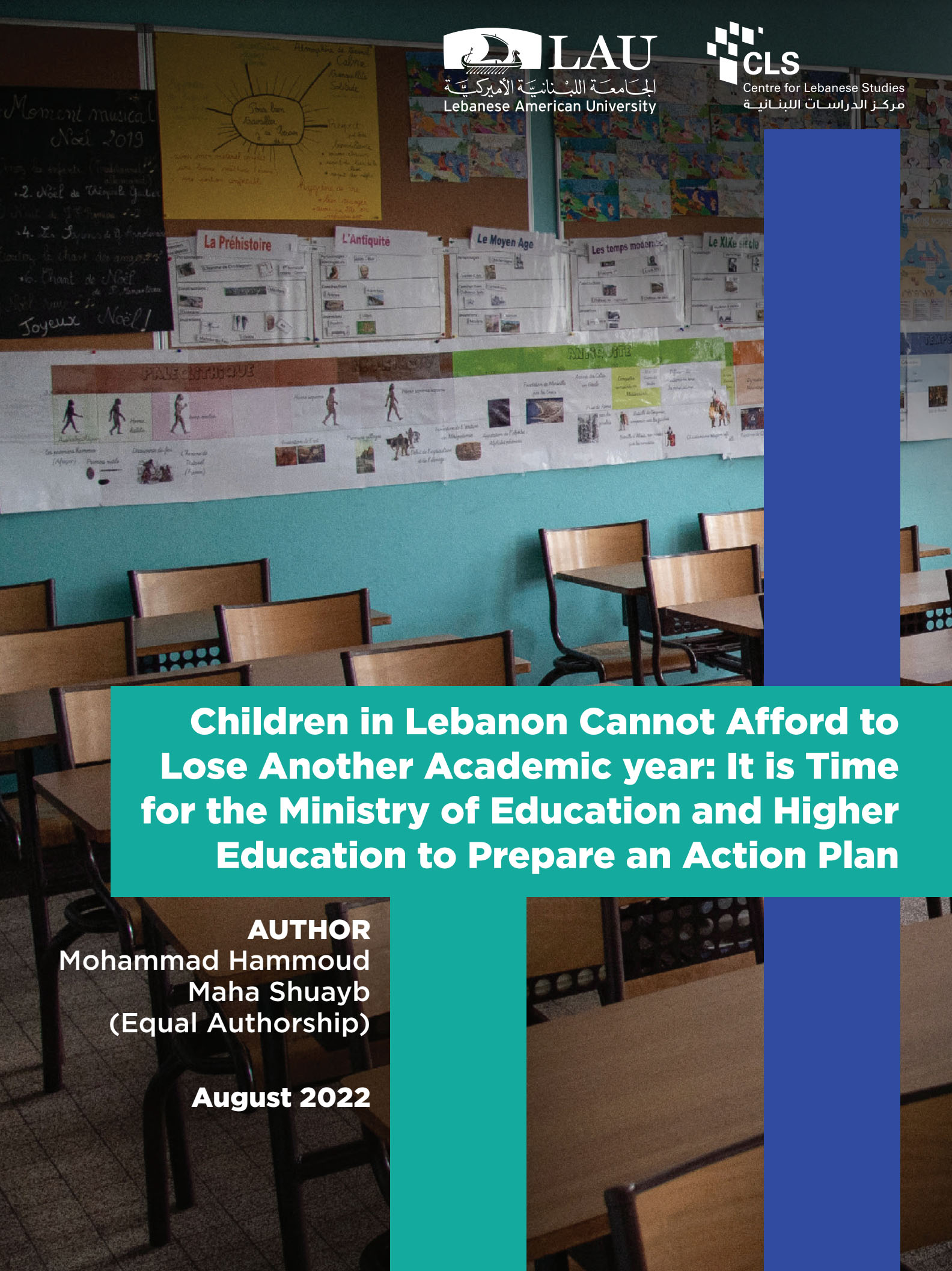 For the fourth year in a row, teachers, schools, parents, and students brace themselves for another rocky academic year. As the summer holiday comes to an end, the Lebanese Ministry of Education and Higher Education (MEHE) has yet to come up with a plan, a strategy or a clear vision for addressing the myriad challenges affecting the learning prospects for 1.5 million Lebanese and Syrian students and pushing over 39,000 public school teachers and 50,000 teachers in the private sector into further austerity.

The MEHE's primary strategy for dealing with the crisis has relied on half-baked solutions to avoid teachers' strikes. The ministry has been bargaining with teachers by offering them trivial financial compensations while threatening them with disciplinary actions if they fail to come to school due to the unaffordable cost of transportation. Meanwhile, students have already missed much schooling due to the 2019 uprising, COVID lockdown, and previous teachers' strikes.

To assess and apply pressure on the Lebanese government, MEHE and the donor community, the Centre for Lebanese Studies surveyed for the second year  in a row the impact of the crisis on the educational sector in Lebanon (you can see last year’s results here). We conducted an online survey of 2,700 parents (89% in private schools and 11% in public schools) and 1,512 teachers (57% in private schools and 43% in public schools) distributed across all eight governorates. We also convened a roundtable with representatives from different teachers' unions, parents' unions, and educational and civil society actors to discuss the findings and develop recommendations to achieve a successful academic year. These recommendations are listed at the end of this article.

The devaluation of the Lebanese Pound meant that teachers' salaries have lost over 90% of their value since 2019. While some benefited from additional financial compensations, their salaries continued to be too low to cover their basic living expenses. According to our respondents, the average teacher's monthly income is 131$, while their monthly commute costs 128$, leaving them with 3$ to live on for the entire month.

The high cost of transportation forced 60% of teachers to miss teaching days. As a result, 20% received disciplinary measures due to absenteeism and were denied the 90$ additional compensation. These difficulties negatively affected teachers' motivation to work and psychological well-being and worsened their relationship with their school management.

While MEHE issued an additional 90$ allowance to compensate for the devaluation of salaries, over three-quarters (86%) of teachers described the performance of the ministry as poor. Teachers' syndicates have also failed to provide adequate support for teachers, as more than half of our respondents stated that the performance of private and public teachers' syndicates was unsatisfactory.

The economic crisis has also affected schools' ability to run. Three-quarters of teachers reported that their schools are not fully ready to start a new academic year amid fuel and staff shortages, which can significantly impact the quality of teaching and learning for the fourth year in a row.

Children in Lebanon, especially Syrians, have missed much learning over the past three years, which can devastate their academic future. According to one-third of the surveyed parents and teachers, the crisis has lowered children's academic performance and overall psychological well-being, with 10% dropping out and 15% repeating their grade level.

The average annual tuition fees (1,037$) and transportation costs (1,318$) paid by parents per child is 2,355$. Despite MEHE's restrictions on increasing tuition fees in private schools, 7 out of 10 parents reported that their child's school demanded part of the tuition fees to be paid in US dollars on top of the increasing cost in Lebanese Pounds. Against this increase in tuition fees, the average monthly household income reported by parents is 462$, meaning that 42% of their yearly income is spent on one child's schooling. These figures exclude additional schooling costs such as books and stationery.

With increased tuition fees, half of the parents reported that they have recently moved their child from a private to a public school, with 87% indicating that they could no longer afford to pay tuition. Transportation is another barrier facing parents, with the average parent spending 110$ to cover their child's commute to school. All these challenges threatened children's academic future as 72% of parents reported that they might no longer afford to pay for their child's education, and 10% indicated that their child might have to enter the job market early.

Donor funding to the educational sector in Lebanon has always been available. Nevertheless, the poor management and lack of transparency and accountability have impeded any serious efforts to strengthen the sector.

Donors are partly responsible for not demanding greater transparency and not questioning MEHE’s continuous failure to deliver on its promises over the past 30 years. More than any time before, it is critical for the local and international community to apply pressure on Lebanese educational authorities to prepare and deliver a successful academic year for students in Lebanon; otherwise, children in Lebanon will lose a fourth year of their academic learning.

Forming an education pressure group that is active locally and internationally and pushes for structural reform at MEHE in terms of appointment of staff and strengthening transparency and accountability mechanisms is critical for saving the educational system in Lebanon and the schooling of over 1.5 million school-age children in Lebanon.

Recommendations for the current year