Education Response(s) to COVID-19 in Jordan: Ongoing Education at all Costs 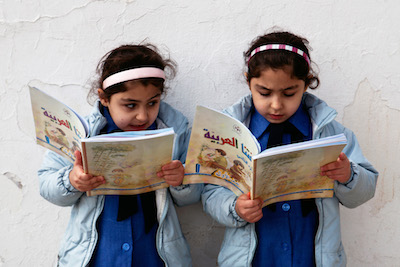 2,372,736 learners in Jordan from pre-primary all the way to tertiary education, nationals and non-nationals, are affected by the nationwide closures of educational institutions [1] as the country comes towards the end of its second week under lockdown to contain the spread of COVID-19. This past March has had continuous updates and drastic daily changes for learners, starting from the Ministry of Education (MoE) arguing in the second week of March that there is no need to disrupt education (since there is only one COVID-19 case in the country), to now having the entire country in its third week of school closures with focused attempts by all relevant actors to move to distance learning.

After just one case of COVID-19 on the 2nd of March, the number increased to a total of 13 on the 15th of March, which was announced as the first day of school closures. On the 17th of March the National Defense Law was activated and on the 21st of March a full lockdown was initiated. The first few days of closures for schools and meant that the students were home, and some teachers and administrators were still working within their institutions to continue providing classes through the use of online tools. But as the full lockdown came into place, individual responses from schools were no longer viable and the MoE rolled out a number of interventions in which it aimed to ‘continue with education’. Within this context, it’s important to note that refugees in Jordan enroll in formal education within the national public system and hence would, to an extent, benefit from the same interventions MoE undertakes.

Darsak was launched on the 22nd of March as a distance learning platform to host recorded videos based on the Jordanian curriculum for students from the 1st to 12th grade covering Arabic Language, English Language, Maths, Sciences, and additional subjects for 11th and 12th grades based on the stream. The platform was launched as a collaboration between the MoE, The Ministry of Digital Economy and Entrepreneurship, developers Mawdoo3, and content providers: Edraak, Abwab, and Jo Academy, perhaps one of few education interventions in the country involving public, private, and not-for-profit partners. To ensure maximum accessibility, the platform was made free to access between 6am and 4pm. In addition, 3 national TV channels started broadcasting these videos, one of which was specifically for 12th graders who would at some point be sitting for the general secondary education certificate examination, Tawjihi. This step reflected an understanding that the majority of households in Jordan have TV units, as opposed to computers/laptops or students each owning their own smart phone.

Other actors seem to directly and indirectly further support the reach of MoE interventions to the most vulnerable learners, for example the Jordan Electric Power company announced that they will not be disconnecting electrical power from any households that have not paid their bills and will reconnect it for those it had previously disconnected the power from [2], and The United Nations High Commissioner for Refugees (UNHCR) announced the extension of the electricity supply hours in both Azraq and Zaatari camps for Syrian refugees [3].

In addition to the MoE efforts, the Jordan Education Sector Working Group has conducted a mapping of education response to COVID-19 identifying a number of on-going and planned activities by NGOs and UN agencies all over the country and within Syrian refugee camps. Activities ranged from offering distance learning covering non-formal education, remedial education, and learning support services and more, using diverse modalities such as Whatsapp, SMS, Zoom, Facebook Live and Facebook closed groups, YouTube videos, and even printed workbooks to the most vulnerable with limited access to hardware, all the way to UNICEF providing financial, in-kind, and technical support to the MoE.

A number of interventions are either on-going or will be launched soon, but many things remain unclear and pose questions to reflect on. How many of the learners in the country are these interventions reaching? Are the issues faced by the most vulnerable being addressed, or will the education inequality gap grow bigger? Are parents being engaged properly to enable the learning of their children? What is the quality of the interventions being offered? How is being socially disconnected affecting the learners? And how will this period affect the future of education in Jordan? At this stage, it is not clear how much longer the country will remain under lockdown with schools closed (and how much longer humanity will fight this battle), and what the costs of continuing or not-continuing education are or would be, but what’s clear is that both state and non-state actors in Jordan have decided to keep the education system ongoing at all costs.