Marginalized Youth in a Failed State 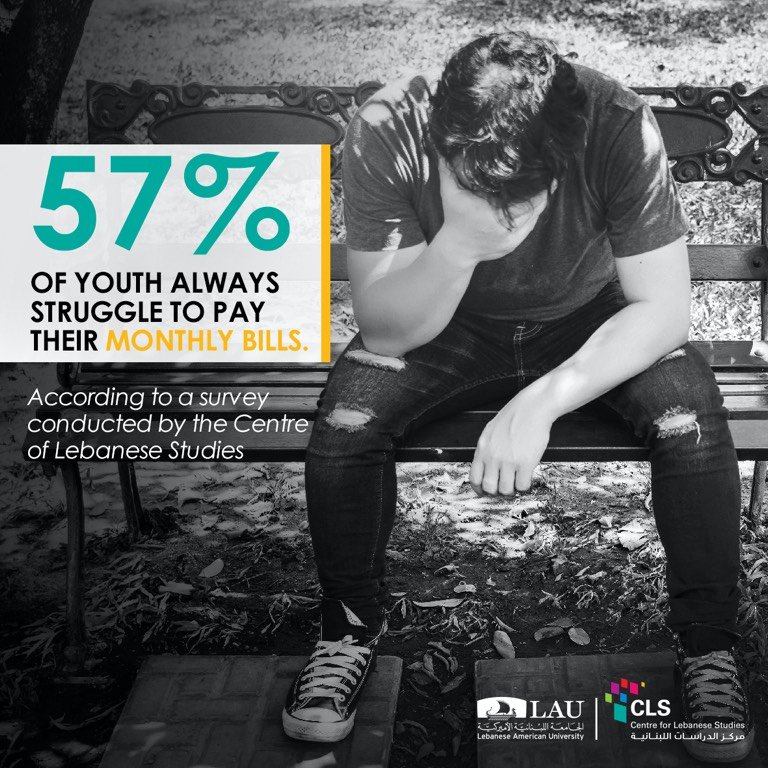 The condition of youth residing in Lebanon is exacerbated by a disintegrating state that is no longer capable of meeting its people’s basic needs, the result of thirty years of power abuse, nepotism, and mismanagement of a confessional ruling elite. The state's bankruptcy and financial crisis emerged after years of poor financial engineering and corruption. The global pandemic came to make things even worse.

Recently, the state's failure was demonstrated by the Beirut Port explosion which ripped the Lebanese people from any remaining hope. This all posed great challenges to youth residing in Lebanon, mainly challenges related to education, employment, and perceptions regarding their future.

Youth from low-income families, school dropouts, and those who are unemployed are all at risk of having a compromised future whilst hoping to slip through the cracks of a failed system. They are young Lebanese, Syrian, and Palestinian refugees at risk of being destined to dismal futures as many do not have access to quality education, apprenticeship programs, or job opportunities. They grow up struggling to carve a place for themselves and earn a living.

A recent survey conducted by the Centre for Lebanese Studies interviewing 742 youths in Lebanon revealed alarming rates of dropout and unemployment among youth caused by the dire financial situation. For instance, more than half of the sampled young individuals reported that they always struggle to pay their monthly bills.

Access to education is limited to students from well-off socioeconomic backgrounds, while others are forced to drop out to work and support their families. 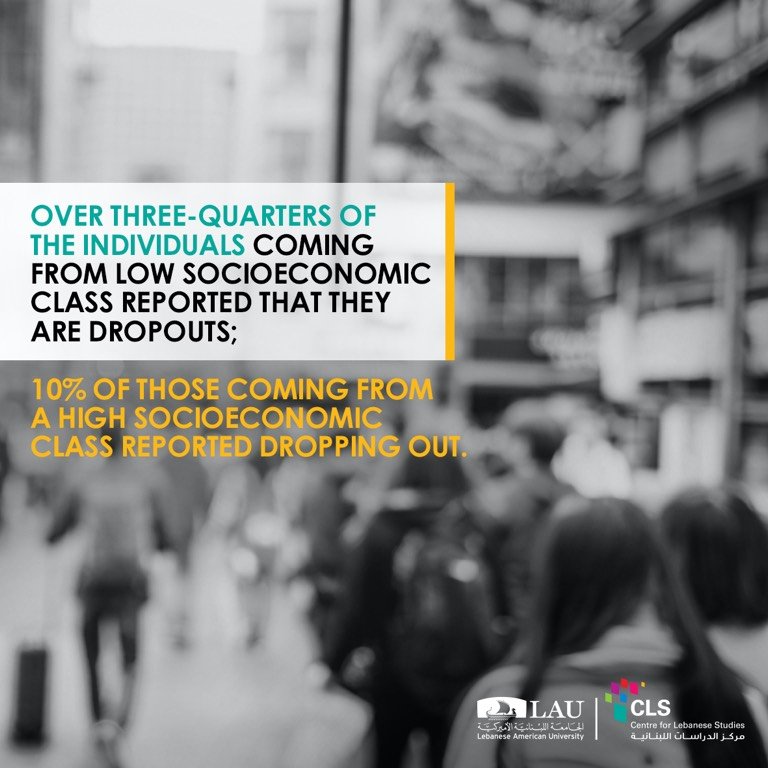 This shows that socioeconomic class might be a significant determinant of youth’s dropout. The middle class is striving in Lebanon. With the worsening economic crisis, dropout rates are expected to further increase with a shrinking middle class.

Investing in productive sectors such as manufacturing and agricultural sectors has been long neglected by policymakers, who speak of Lebanon as the "Switzerland of the East," limiting development activities to the banking and tourism sectors exclusively and turning Lebanon into a rentier state.

Lebanon is currently the third most indebted country in the world, with a staggering trade deficit. Interest payments on the enormous debt consume almost half of the government's revenues each year, crippling the government's ability to spend on infrastructure, education, and productive sectors that play a key role in creating job opportunities.

Along with the poor economic structure and limited job opportunities, existing research points to a skill-job mismatch leading to increased unemployment and brain drain among educated youth. 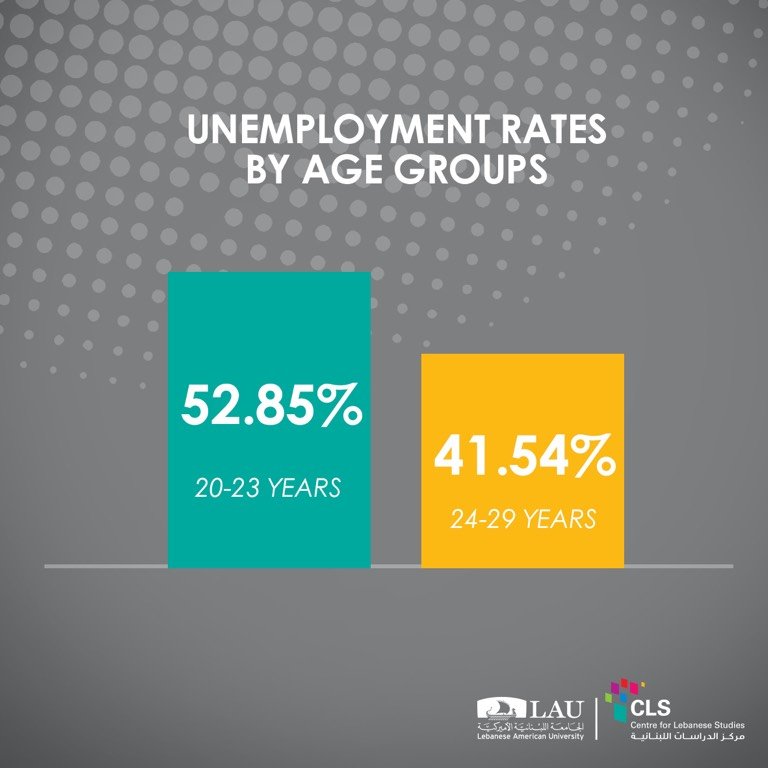 This coupled with income inequality, increasing poverty, policy mismanagement, and countless corruption led to the uprisings in October of 2019. Protestors filled the streets calling for an end to sectarianism, corruption, lack of essential services such as electricity and water. The state failed to meet the protestors' demands and, in many cases, used political repression to end protests.

The corrupted system, which functions based on the principle of favoritism, is creating a barrier for youth employment. Around 18% of youth reported that it is difficult to find a job in Lebanon without a “Wasta."

This explains why two-thirds of the respondents reported that they expect difficulties finding a job post-graduation, and almost 58% indicated that they are not optimistic about finding a job in the future. Consequently, many young individuals (41%) are left with no choice but to leave the country seeking opportunities elsewhere. 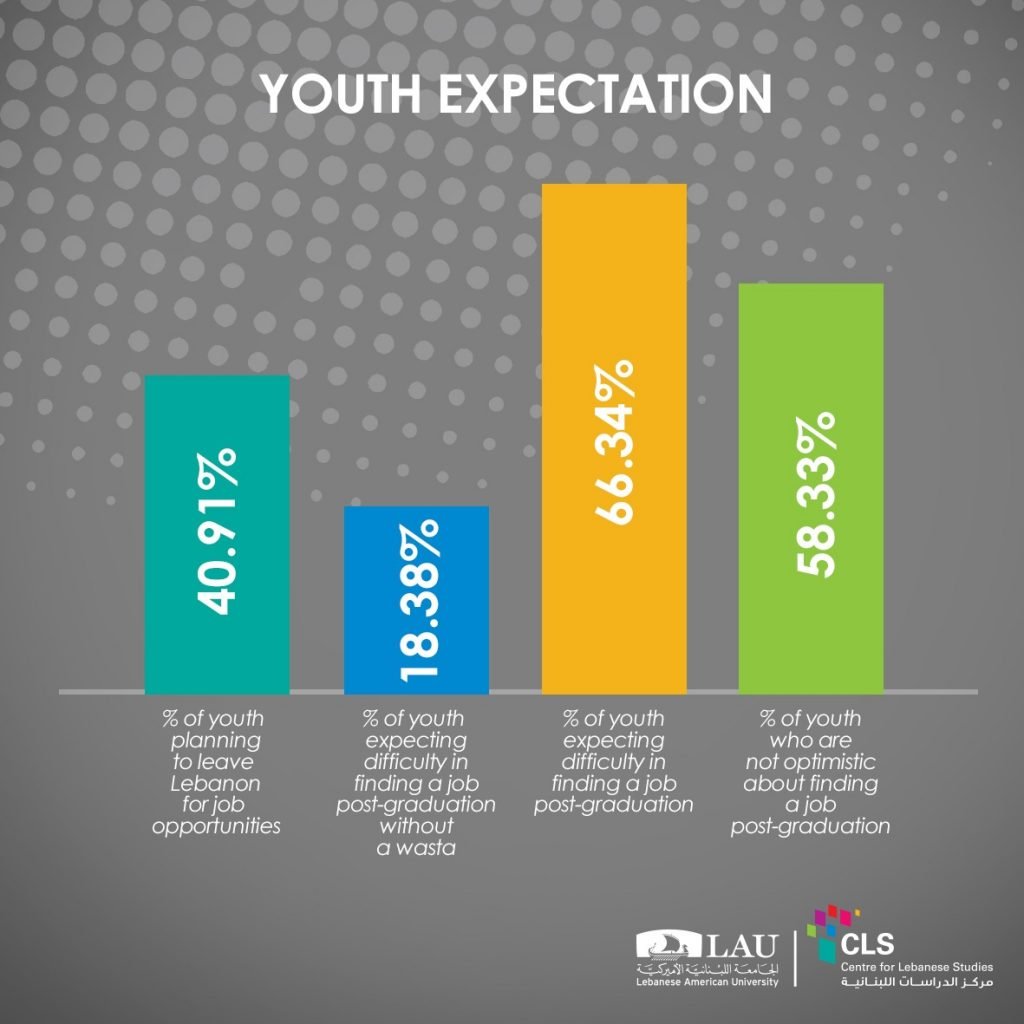 Educated, productive, and skilled young adults are critical to the nation’s workforce, economic growth, and national security. Over the years, the government has failed to look after its youth and did not provide them with basic resources to enhance their capacity for achievement.

The state must implement policies that create dynamic economies with diversified sectors and job opportunities to lower youth unemployment rates. Similarly, the state should provide financial support for families to guarantee equal access to education to all social classes and alleviate the pressure on children pushed to work. The youth of Lebanon undoubtedly need support from the international community. Most importantly, unconditional support that is free of any political subordination.

Mohammad Hammoud is a Research and Project Manager at the Centre for Lebanese Studies. His research focuses on political and socioeconomic topics mainly peace, migration, political participation, and international sanctions. This Op’ed is part of a study being conducted on youth residing in Lebanon.