The economic crisis has pushed 40,000 students to join public schools 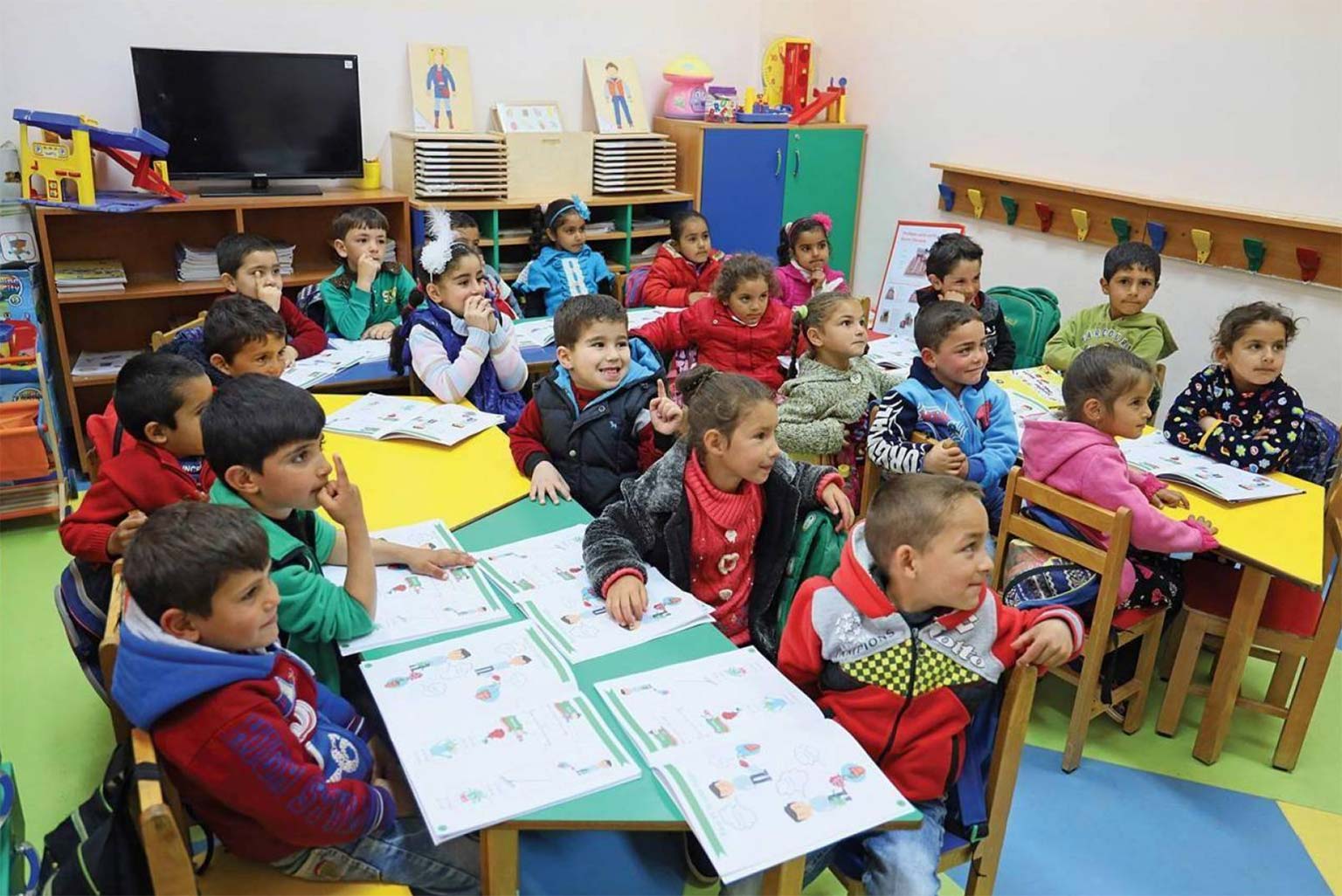 Unable to pay school fees, an unprecedented number of families have decided to remove their children during the school year from private schools into public schools. The public sector is however not prepared for such a large influx.

As a sign of the financial distress suffered by Lebanese families, 39,189 students switched during the current school year from private to public education, according to data collected by the Ministry of Education on January 20. This number represents an increase of more than 15% compared to the 260,000 Lebanese children who registered at the beginning of the academic year in September.

“This is a far higher rate than the previous years”, says Jamal Baghdadi, who is in charge of public secondary schools at the Ministry of Education and Higher Education. New transfer requests are coming to us on a daily basis”.

Secondary education is proportionally the most affected. The number of students enrolled, due to the increasing number of requests, has swelled by almost 22% since September. “Parents prefer to invest in primary education, and then switch to secondary public education which, relatively speaking, has a better reputation”, says Maha Shuayb, director of the Center for Lebanese Studies.

On a geographical level, according to figures regarding secondary education, the densely populated caza of Baabda is one of the most affected, and particularly the southern suburbs of Beirut. Nearly 1,800 students have joined public high schools in the region. The situation is also particularly difficult in Mount Lebanon and, even though with a lower number of school children, in Keserwan. Other cazas, such as Akkar, Baalbeck and Jezzine, have also recorded a lot of transfers and a corresponding increase in the number of public school students.

Symptom of the crisis

The difficulties in paying their children's school fees is the main reason why families are choosing to make these withdrawals, according to applications received by the Ministry of Education, on which the parents must state the reason for the transfer. "Without work or with half-wages for months now, some people are finding themselves financially strapped”, warns Jamal Baghdadi.

Today, tuition fees throughout the private education sector range from 4 million Lebanese pounds, to over 20 million per year, compared to less than 300,000 Lebanese pounds that parents pay as administrative fees in the public education sector. "According to our data, around 60% of parents are having financial difficulties”, says Lama el-Zein, president of the private schools union of parents’ and guardians’ committees.

At the College des Saints-Cœurs in Tripoli, which is known to have a solid social mix, about one hundred children left the school in the middle of the year, out of the 1,275 who started in September. "Forty students have moved abroad, two or three have left to attend another private school, and about fifty others have joined public schools”, says Sister Georgette Abu Rjeily, the Principal of this private Catholic establishment. "However, our tuition fees have remained stable ever since the new official salary grid”, she says. Over the past three years, the fees have been around four million Lebanese pounds for the primary school, and five million for the secondary.

The amplification phenomenon of “law 46”

The increase in school fees caused by the reassessment of teachers' salaries, a result of Law 46 -adopted in 2017-, was the first shock for parents of students at private schools. As an example, among the five fee-paying secondary schools belonging to the Mission laïque française (MLF), the increase in school fees, ranging from 13 to 28%, caused the departure of some 350 students. This measure also had consequences within semi-free private schools, where half of the education is covered by the State. Father Marek Cieslik, in charge of four of the schools that belong to the Saints-Cœurs congregation in the Beqaa region, remembers having lost "forty students to public schools".

Education however, is usually an expense on which Lebanese households do not compromise. "Even the most disadvantaged families often prefer to become indebted rather than putting their children in the public system, which is perceived as being of a lesser quality”, describes Father Marek Cieslik. "It is also a matter of reputation: usually, your place in society is judged according to the prestige of your children's school”, he says regretfully. The tens of thousands of decisions to transfer to public schooling, which were taken hastily in the middle of the school year, therefore serve as a proof regarding the critical financial situation in which many families find themselves today.

If the economic conditions continue to deteriorate, these school transfers are expected to accelerate. "At this rate, it will not be entirely impossible by the end of the school year, to reach a 50% increase in the number of students in public high schools”, warns Jamal Baghdadi. "Usually, transfers during the ongoing school year can only take place until the end of December, but the Ministry has extended this deadline due to the exceptional situation”, she says.

The big question being raised now, is the ability of the public education sector to absorb such a large outpouring of students. Especially that, ever since the beginning of the Syrian crisis in 2011, the number of non-Lebanese students has increased from 3,000 to 210,000, reaching almost as many as the Lebanese students. In order to cope with this unprecedented influx, a second afternoon session of classes was opened up for new foreign students.

Jamal Baghdadi says that, at least for the time being: "All students will end up somewhere." But not necessarily in the school of their choice. Already, at the beginning of the academic year in September, some schools were forced to let students go. “Some public schools, especially in the second tier, have a good reputation. Disciplinary rules are better respected there, and exam results are pretty good. Some parents actually prefer to have their children in public schools”, says the Ministry of Education’s representative. An example, is the fact that more than a thousand pupils were on the waiting list of Bayssour’s public school (Mount Lebanon), the latter having the capacity to welcome 700 students.

The uneven distribution of public schools across the Lebanese territory is also problematic.

The entire network of 1,257 schools has an average of one teacher per nine students, according to figures from the Center for Educational Research and Development (CERD) for 2016-2017. This is more than the average number in the paid private schooling sector, which averages one teacher per 21.5 students. "But in some areas, public schools have fewer than ten children per class, while in other regions, especially in Akkar and Beqaa, the teacher-student ratio is exploding, and classes are overcrowded”, says Maha Shuayb.

A plan that is still unclear to the public

"If a family is unable to find a school at a short distance from their home, one needs to also think about transportation costs", points out Violet Speek Warnery, deputy representative of UNICEF in Lebanon, who participated in the launch of a think tank -as part of the Ministry of Education-, in order to try to find solutions to the schooling sector’s crisis a few weeks ago.

The planning of potential solutions for the short term seems to still be in its early stages. "It is difficult to implement a strategy without knowing how far things can go; our feedback and response will depend on the development of the country’s economic situation”, says Jamal Baghdadi. "For the time being, our objective is to make an inventory of the remaining spots in the institutions”, she says.

At the present time, it is impossible to hire more teachers, since public service recruitment has been frozen. Nor can the schools count on relocations from one region to another, because "Lebanese law limits the geographic mobility of the staff", says Jamal Baghdadi.

To optimize the number of students in classrooms, one of the solutions would be to bring the high school students who share the same specialties together within the same premises. "But no action has been taken yet”, states Jamal Baghdadi.

In order to avoid a bottleneck, increasing attention is now being paid towards the crisis in private schools. "While so far most of our action has been focused on public schools, which carry the greatest number of disadvantaged students, and which respond to the Syrian crisis, private schools are clearly a big part of our discussions today”, explains Violet Speek Warnery.

A large number of private schools are under threat from parents failing to pay, or delaying payment of school fees. The Collège des Saints-Cœurs, in Tripoli is suffering from a deficit of 525 million Lebanese pounds for the 2018-2019 school year, due to unpaid school fees. By January it had received only 24% of the tuition fees of 2019-2020. "We are not expelling the students whose parents are not paying”, says Ibrahim Mahfud, president of the parents' committee, eight of thirteen members of which are now in financial difficulty. It’s a management decision”. But not all schools can afford to do the same.

Within the framework of the emergency committee created by the Ministry of Education, the private schools union of parents’ and guardians’ committees has put forward for adoption a budgetary austerity plan which would protect the rights of teachers, and would also reduce school fees by about 30%, "in order to preserve the continuity of the schools”, says its president Lama el-Zein.

"We must not overlook the enormous social role that schools play, be it by protecting ideologies, preventing violence…”, says Father Marek Cieslik. “In the event of a decline in the education system, either private and/or public, the country as a whole will end up paying the price.”