Social and Political Change in the Aftermath of the 2005 Hariri Assassination: Implications for Everyday Life in Lebanon 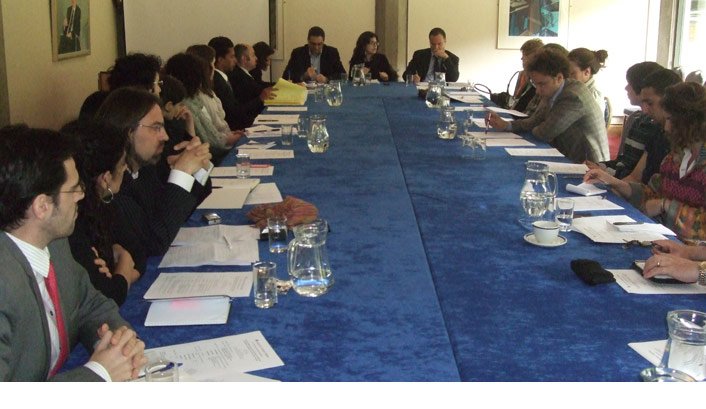 The goal of the conference was to understand violence and conflict in the country, and how these are perceived and inhabited in everyday life. The conference analyzed current political divisions, politics of sectarianism, affects of violence, civil society activism, and the everyday workings of clientalism that all serve to further our understanding of the socio-political scene in Lebanon after the Hariri assassination.

The aim was to bring together scholars working on Lebanon to promote the mutual exchange of their ideas and experience, to offer informed perspectives of life and politics in Lebanon, and to create a space to share new theoretical frameworks by which to understand the country both socially and politically. The goal was also to mix interdisciplinary approaches, specifically political science and anthropology, to provide varying perspectives to the study of Lebanon. In all this the conference fulfilled its aims.

There were about 50 people in attendance throughout the day. Attendance included the French Ambassador’s political attaché, a representative from the Middle East and North Africa division at the Foreign Office, a BBC correspondent, Mr. and Mrs. Asseily, faculty from the Middle East Centre and International Relations Department at Oxford, and students from LSE, SOAS, and Oxford.

The day opened with introductions by George Asseily, Sami Hermez and Luc Borot, who is the director of the Maison Francaise, as the conference was co-sponsored by them as well as the Oxford-Science Po Research Group and the Middle East Centre.
The morning panel, entitled “Lebanese Political Parties and the Politics of Sectarianism: Political Science Approaches,” began with Bernard Rougier, Assistant Professor in Political Science at the University of Auvergne, Faculty of Law and Science Po Paris. His talk was titled, “Syria and Sunni Lebanon After 2005: Stakes and Levers.” Rougier provided an analysis of the emergence of Hariri and the Future Movement as a political player in Lebanon. He identified such things as a lack of a public fund for Sunnis and the defeat of an urban elite in contributing to the rise of Hariri. He also spoke of Salafi-Syrian relations as being a way to counter the power of Hariri during the time of Syrian rule in Lebanon. Rougier’s fresh analysis opened the room for discussion of the way Saed Hariri has created a Sunni Lebanese community post-2005.

Rougier’s presentation was followed by Aurelie Daher, postdoctoral fellow at the University of Oxford, on “Hezbollah as a Political Actor since Rafic Hariri's Assassination.” Daher’s presentation provided an intriguing analysis on the formation of Hezbollah, specifically highlighting the difference between the party and the “Islamic Resistance in Lebanon” (IRL). She argued that Hezbollah’s priority, as a political party, has always been to protect the IRL from domestic threats against the resistance. She stressed that before the Hariri assassination Hezbollah and the IRL were safe because the state was pro-Syrian, whereas after Syrian departure, Hezbollah was put in a situation where it had to defend the IRL in absence of state support. Daher’s reading of Hezbollah proved to be a revision of past work on this topic.

Following Daher, Joseph Bahout, lecturer at the Institut d’Etudes Politiques de Paris (Sciences Po), and senior fellow at Académie Diplomatique international, presented on “Istiqlâl after ihbât? Christian New-Old Dilemmas.” In his analysis, Bahout tackled the question of the Christians in Lebanon, arguing that today they are “sandwiched” between the Sunni and Shi’a conflict. He outlined the historical context between dustoor Christians and more national currents, and asked us to question the role of Christians in Lebanon from the point of view of the competing political parties. Bahout’s analysis, especially within the context of the other two presentations, left the audience with much food for thought.

After lunch, where participants were able to meet and have more intimate conversations, the afternoon panel opened, entitled “Lebanon's Public Life and Institutions: Reflections on Politics in Society.” The panel began with a presentation by Sami Hermez, CLS Fellow, on “Living Everyday in Anticipation of Violence in Lebanon.” Hermez questioned the way people imagine their futures in a context of impending political violence. He argued that the way people anticipate violence is informed by their political beliefs, allegiances and views, and this had an impact on how they behaved and how they perceived their future.

Heiko Wimmen, PhD candidate in Political Science at Freie Universität Berlin, and fellow at the German Institute for International and Security Studies in Berlin, followed Hermez. Wimmen’s talk on “Civic Activism and Non-Sectarian Citizenship: Lebanon 1996-2011” examined power-sharing and civic involvement in divided societies. He was interested in how society could break cycles of internal conflict, and questioned the place of power sharing as a solution for divided communities. Wimmen was concerned with people’s motivations and agency outside of official and institutional processes.

Muzna Al-Masri, PhD candidate in anthropology at Goldsmiths, University of London, then presented on “Hariri and the Patronage of Nejmeh Football Club: Changing the Players or the Game?” Al-Masri’s focus was to investigate Nejmeh Football club as a place and institution that can open a conversation around sectarian and clientele forms of social belonging and organization. She asked us to think of the politics and social connections of powerful political elites and how this translates at the level of people in society. In her presentation, Al-Masri compared two leaders to highlight the way patronage systems work and the deep complexity of the patron-client system in Lebanon that is in continuous flux and transformation within the state system.

Finally, Michelle Obeid, Social Anthropologist and post-doctoral Research Fellow at the University of Manchester, discussed the three papers of the afternoon panel. Obeid’s analysis highlighted common themes within the three papers. She found that each was questioning the fluidity of certain identifications that seem rigid in Lebanon, such as sect, party and family, and their papers showed the challenge of pinning these identifications down. Obeid also found that all three papers questioned the role of the state and attempted to identify its presence and formations.

After a short break, the conference moved to the Middle East Centre where Theodor Hanf gave the Keynote address. Hanf is an Honorary Professor of Political Science at the University of Freiburg, a Professorial Fellow at the Arnold Bergstraesser Institute, and Visiting Professor of Political Studies at the American University of Beirut. He is author of the influential book, Coexistance in Wartime Lebanon: Death of a State and Birth of a Nation (1993). Hanf’s presentation was titled “How Resilient is Lebanese Communalism?” He called for shifting the frame of conflict from sectarianism to communalism, arguing that this was a far better representation of the conflicts in Lebanon. Hanf described the results of several surveys he took over the last few decades to show that although people want change and believe it to be possible, communalism remains resilient. His surveys ran through the period after the Hariri assassination, and showed the persistence of communalism into the current moment. Hanf’s conclusion was that allowing for civil marriage could be one way to break from communalism.

Overall, the 2011 CLS conference was a success judging from audience feedback and excitement of all those involved. The Maison Francaise has expressed interest in partnering with the CLS in the future. The smooth implementation of the conference and professional atmosphere that day added to the image and position of the CLS as a serious centre for those concerned with the study of Lebanon.