The youth revolution for a Lebanon where they can stay 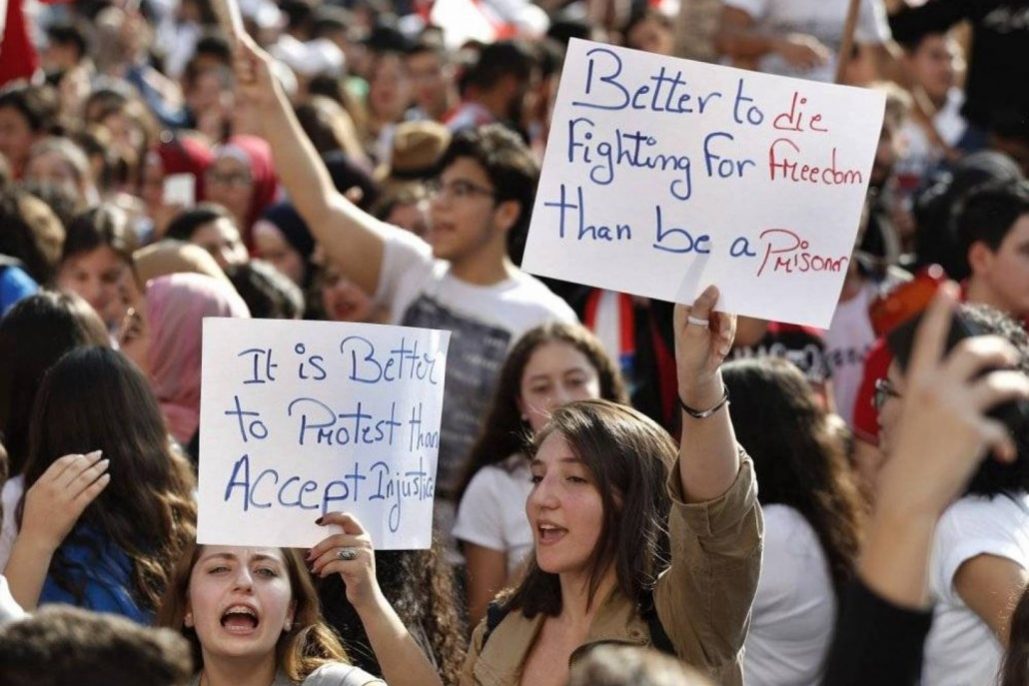 The 17 October Revolution in Lebanon may be a spontaneous movement wanting to remain “fluid” without clear leadership, but youth are clearly at the helm of this mass mobilisation, dubbed the “student revolution” as protests entered their fourth week. Open discussions and debates take place in downtown Beirut on a daily basis discussing a wide range of socioeconomic and political issues in bottom-up citizen-led deliberations. Discussions are participatory, democratic and equal and protests are decentralised and non-violent. Each neighbourhood or group holds its own internal discussions for mobilisations and makes its own decisions.

It is not only the scale of the revolution that is unprecedented, but also its aspirations for change. The 17 October revolution is not just a political intifada but a cultural revolution toward a more inclusive Lebanon, one where youth will no longer passively accept discrimination based on age, sect, gender, socioeconomic background or any other grounds. Equal opportunities are a basic tenet of an inclusive economy and society, and it is precisely this usurpation of equal opportunities that youth were leaving their classrooms to contest on the streets.

The country came to a standstill for the first two weeks of the revolution with leading educational institutions, faculty and students supporting the mobilisation. The University Professors’ Coalition, which brings together professors from private and public universities, actively participated in the mass mobilisation, emphasizing the need to protect the independence of higher educational institutions and particularly the Lebanese University, the only public university. A joint statement by the presidents of the American University of Beirut (AUB) and Saint Joseph University (USJ) urged the Lebanese authorities to “embrace the new spirit … to build a civil state that goes beyond sectarianism and interest-sharing.” The Parents’ Committee in Private Schools fully supported the closure of schools, with the Committee issuing a statement stating that “a degree framed on the wall is useless if its holder is unemployed.”

When schools and universities re-opened their doors during the third and fourth weeks of protests, however, it was students themselves who refused to return to business as usual. Thousands of school and university students from across the country deliberately left the classroom and joined nationwide protests on 6 November. Students from public and private universities self-organized forming the group “October 17 students” the next day to coordinate collective protests and exert pressure on universities not to open before their demands are met. On their banners and in interviews, several students repeated they were “not going [to class] to learn history,” but were “here to write it.” Their position, as summarised in one banner, was simply, “Why have an education if we have no future?”

This inability to convert educational credentials and resources into enhanced employment opportunities underpinned the frustrations of many young protestors. According to a recent report by the International Monetary Fund (2019), youth unemployment rates reached 30% in Lebanon. Labour market participation rates, on the other hand, were as low as 41% for Lebanese youth between the ages of 15-29, with just one out of three youth in employment.

The expectation that equalising education opportunities would help level the playing field and enhance opportunities in the labour market for all had clearly failed. Instead, the share of university graduates in Lebanon exceeds local demand for high skills. This is evidenced by higher unemployment rates among secondary and university graduates, the low graduate wage premium and an increase in the brain drain, with an estimated 44 percent of Lebanon’s tertiary education graduates emigrating according to the World Bank.

The youth who were on the streets not in the classrooms, however, chose the streets precisely because they viewed this as their only opportunity to carve out a different future for themselves in Lebanon. Since the start of the revolution, in fact, students and university graduates have been raising banners on a daily basis expressing their anxiety about the future. “We are studying for a future we won’t have,” said one student. “Interior designer looking for a job,” said another. Emigration was also a recurrent theme: “When I grow up, I want to be an architect like my daddy but in Lebanon.” Another child held a banner showing how she was deprived of her “right” to live with her father who had to leave Lebanon in quest of a better job and had died abroad.

Yara, a 22-year- old activist who has been participating in the revolution every day since it started, introduced herself as “stateless.” She graduated with a bachelor’s degree in architecture with distinction from the Lebanese American University (LAU) but is currently unemployed. As a third-generation Palestinian refugee, Yara said she felt more Lebanese than Palestinian. Yara, however, does not have the right to work as an architect in Lebanon, as Palestinians cannot work in syndicated professions. Given Lebanon’s violation of the refugee right to work according to international conventions, including for refugees in protracted refugee situations, for Yara, the solution is also emigration.

Nepotism, including in the labour market, also loomed large. The statement “we no longer want wastas, we want to access jobs by merit,” echoed strongly in protest banners and interviews with youth. However, it was not merely recruitment by merit that protestors were demanding, but also decent employment and not working poverty, where “you work from dawn to dusk for 500,000LL ($332),” according to one banner.

On the supply side, the commodification of education was not forgotten by protestors, with several protest banners describing schools and universities as “businesses.” The number of private higher educational institutes in Lebanon, in fact, more than doubled since the end of the Civil War, reaching 49 licensed private higher educational institutions in 2019. This doubling in private universities took place in the absence of the implementation of adequate regulatory mechanisms monitoring their provision of education, as evidenced in the “fake university degrees” scandal revealed earlier this year. “Education is not business,” protested one student.

Social justice, access to quality education and decent employment are not this revolution’s primary demands at the moment. Its primary demands are political. This is because it is well understood that the social justice agenda cannot be advanced without first breaking away from the current sectarian state and moving toward a civil state. It is this new project that has mobilised millions of Lebanese in cities nationwide since 17 October with a new faith in an inclusive Lebanon. As one protestor said, “Before October 17 I will be leaving Lebanon. After October 17, I will believe in Lebanon.”

Ghia Osseiran is a fellow researcher at the Centre for Lebanese Studies.