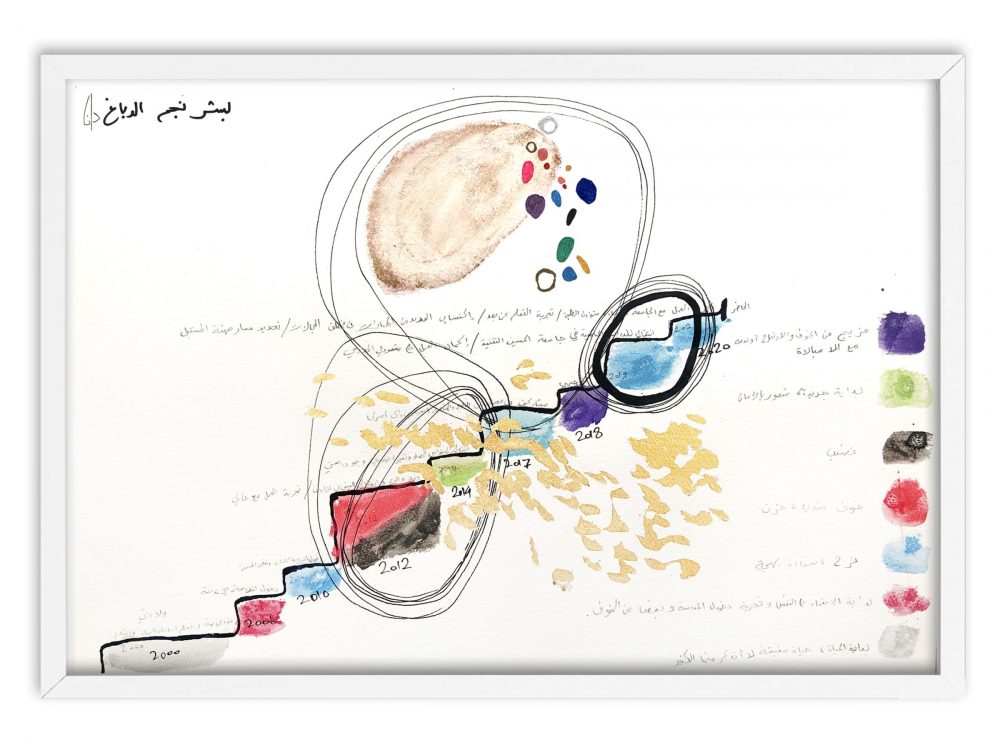 "Then blue expresses happiness and new beginnings after participating in the science fair."

I was born in 2000, and that was a phase where I learned how to walk, talk: the kindergarten stage. I chose gray to express this stage because it is an unclear stage, I don't remember much of it.

I expressed my life by drawing the stairs as if each step of the stairs states a new stage and lesson in my life.

The second step of the stairs represents 2006, when I started elementary school. I chose pink because I experienced self-reliance. In 2010, I moved from elementary to high school. It was a beautiful phase because I was doing well in school, made new friends, and was free to go out and have fun with them.

Red was a turning point in my life because my father died in 2012, and we moved to Jordan. I chose red because it expresses fear and sadness, while the black expresses anger.

Green reflects getting used to the new school system in Jordan. It was a good start for me, I felt safe from what I had previously suffered. The year 2017 was in the green phase.

Then blue begins. It expresses happiness and new beginnings after participating in the science fair. I traveled and got to meet new people and learn new things. It is one of the most important stages of my life.

2019 is when I started university and continued working on my science fair project with my friends. 2020 was an entirely different year for the whole world, starting with distance learning to acquiring new experiences and skills and discovering myself in new ways. I also had extra time to think about my future. So I consider it a happy and fruitful phase because I gained a lot of things.

As for the present, I chose blue because it expresses my present-day college life. I am currently feeling happy and positive. My ambition was not to be a top performer in education because I do not have much competitive opportunities in universities as a Syrian.